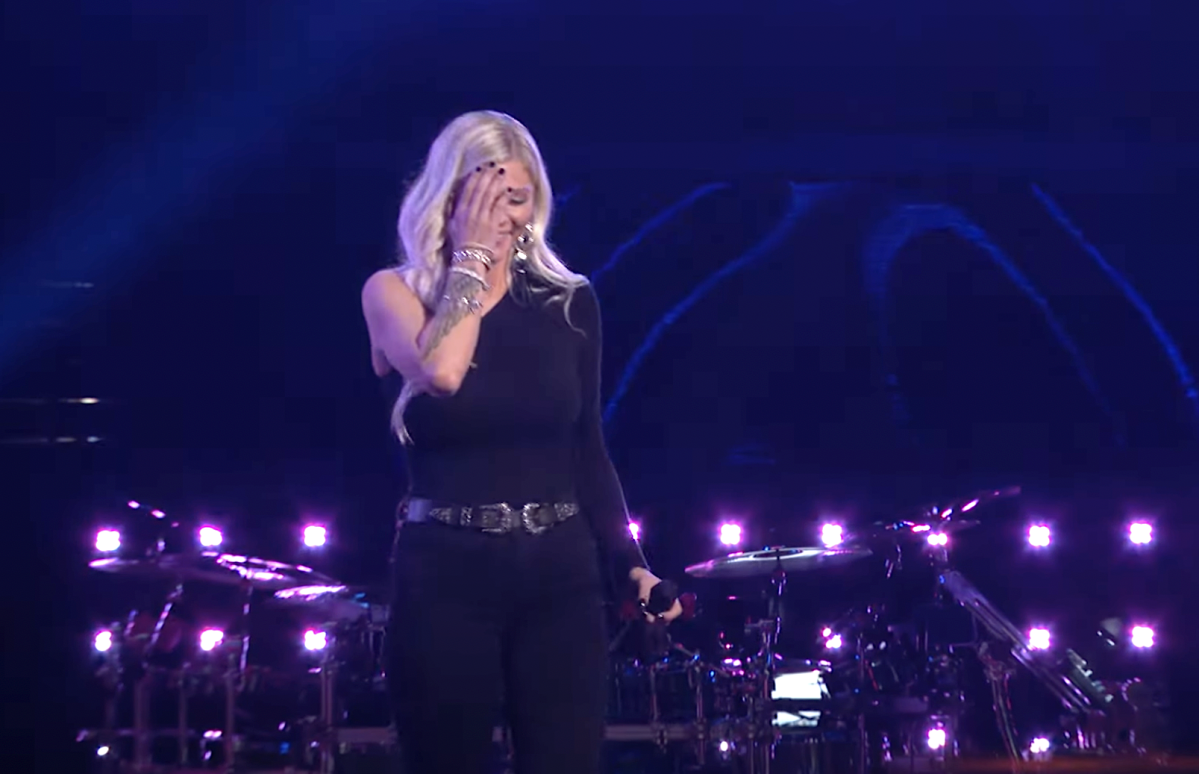 When we last left The voice Season 22, at the end of Monday’s premiere, the endearing country/pop singer Kate Kalvach was still deliberating between the teams of Blake Shelton, Gwen Stefani or new coach Camila Cabello. Blake had had a rough night and failed to recruit a single singer, while Camila had a strong start, even scoring some country performers and a few four-seat contestants. But by the start of Tuesday’s Blind Auditions episode, that cliffhanger had settled: Kate joined Team Blake and so Blake was back in the game.

With that out of the way, the Blind Auditions moved quickly, and soon Blake had to fight his wife, Gwen, for another country artist, 25-year-old Sadie Bass. Sadie had suffered from stage fright since childhood, so no one but her closest relatives ever knew she could sing or write songs. So she decided to face her fears in the most extreme, deep-jumping, rip-off-the-Band-Aid way imaginable: on national television, on one of America’s top-rated shows, for from four of the biggest pop stars in the world.

‘Can I have a minute? I’m so sorry,” a trembling Sadie muttered backstage to the producers, before finally gathered to sing Keith Urban’s “Stupid Boy.” Her nerves were noticeable, especially in the shaky first verse, but her natural talent was evident too. And when the show’s country-crooning power couple finally turned for her, her confidence grew… though she nearly fled the stage just as her performance ended, overwhelmed by the moment.

“Oh my gosh, I literally nearly passed out,” Sadie gasped in relief. But she smiled.

“I’ve had stage fright all my life, 25 years – and today I conquered it with you,” Sadie Blake and Gwen confessed.

“The stage fright can prevent someone from opening up. And honestly, find yourself in this most awkward, horrific situation of a gig? That’s a helluva way to overcome your fear, right there. So congratulations. You did it!” Blake said.

Blake clearly showed empathy for Sadie, but Gwen with her designer sleeves spoke more softly and kindly to Sadie’s predicament, telling her, “Sometimes you just need that person who can be a mirror to yourself and say, ‘Listen, you’re amazing. You just have to let it go now.’ So my coaching would only build you up.

And so Blake’s luck took a different turn. Sadie, despite praying for Blake to turn for her, decided to “go against the grain” and join Team Gwen. “I think I’m the better coach for her,” claimed Gwen, on which Camila – a woman who herself struggles with stage fright – has never performed in front of a live audience before auditioning for the X Factor at age 15 – calmly said, “I agree.”

However, Blake had better luck on Tuesday, recruiting a singer named Kevin Hawkins who would have been perfect for John Legend, and even scored an “ace in the hole,” Brayden Lape, thanks to his alleged new nemesis, Camila. Hmmm. Was that a long-game strategy by Camila, to practically hand over one of this season’s most promising newcomers to Team Blake? I think we’ll find out soon. Meanwhile, these were Tuesday’s other successful auditions:

This little girl with the huge voice, replicating for her culture with a mariachi classic, immediately caught the eye of fellow Latina artist Camila. “L love you’re singing a mariachi song,” Camila exclaimed after she and Reina chatted in Spanish for a moment. “I’m so proud of our culture, and all that music is so beautiful to tap into.” Camila then suggested that Reina take some risks with unexpected mariachi interpretations of, say, Billie Eilish songs. That could have backfired for Camila, but Reina seemed intrigued by the idea.

Who turned around? Camila and Gwen, both of whom jumped out of their red chairs and began to dance.

Result: Team Camila of course. Gwen never had a chance.

With a name destined to end up on an Opry tent (“Has there ever been a country-er name than Leatherwood?” Blake asked), farm boy Bryce seemed destined to end up on Blake’s team. He even sang Blake’s famous version of a Conway Twitty standard – to which Blake, who was “blown away” by Bryce’s deep, Scotty McCreery-esque voice, quipped, “You have excellent taste in music!” Gwen tried to play the map, but couldn’t this time. It rarely does.

Who turned around? Blake, Gwen and John.

Result: Team Blake, of course. Gwen and John never had a chance.

In regards to No Doubt’s tearful breakup ballad due to her parents’ bitter divorce, this teen was real at heart. Camila seemed almost more excited about the song choice than Gwen was, singing along with every word like a Stefani superfan, but her enthusiasm could only get her so far. “Camila, you don’t stand a chance,” John remarked, and Blake agreed and warned her, “You’re wasting your time here.” Camila lavishly praised Alyssa for making the song her own and not trying to emulate Gwen’s unique vocal style, but when Gwen said to Alyssa, “You’re the perfect, ideal dream girl for me,” Camila must have realized that John and Blake were right.

Who turned around? Gwen and Camilla.

Devix, an indie singer influenced by British buzz bands like Daughter and Foals, tormented a beautiful version of Glass Animals’ crossover hit, drawing the coaches in with his powdery yet powerful vocals and sleepy, slow-burning delivery. He may be my favorite Season 22 contestant yet. Gwen loved his “character voice”; John found it both “magical” and “distinctive and commercial”; and Camila said Devix would fill the open “indie slot” on her team perfectly. This one could have gone either way.

Who turned around? John, Camila and Gwen; Blake abstained because he didn’t think he was “cool enough” for Devix. Probably a wise decision.

Result: Team Camilla. And so her indie slot was already filled by episode two.

Chello, a church singer who dreams of writing and producing behind the scenes, seemed like a natural choice for multiple hyphenated John. I immediately dug this vibey hipster nerd. Camila called him a “cool, cool cat” and appreciated that he didn’t bring out all the riffs and runs and gimmicks right away, but saved his few carefully curated tricks for the end of the gig. “I can imagine listening to your records in the car,” she purred.

Who turned around? John and Camilla.

Result: Team Camila, which wasn’t surprising after her aggressive sales pitch: She was “willing to just get on my knees and beg” for this man!

Wow, this guy was pure dynamite! A consummate entertainer, with style (that business suit!), charisma and a sparkling, sharp voice, it’s no wonder this high school piano teacher was a four-time chair turner. “Your voice sounds like a record. Sounds like a Grammy performance,” Gwen told Kevin excitedly.

Who turned around? All four coaches… but Gwen blocked John. “A piano teacher singing Stevie Wonder, and I don’t stand a chance to fight,” John sighed. “L wish I could work with you, Kevin.’ I doubt John will get a chance to steal Kevin in the Battles of Knockouts too.

Result: Team Blake! Gwen’s gameplay surprisingly ended up helping her husband instead. “L hate that Blake would have the winner,” Camila lamented.

I didn’t expect such an angelic, hoarse voice to emanate from this inexperienced city kid; he sounded so serious, so pure, so beautiful. I can only assume that this was a misleading montage and that Brayden’s audition was shown out of sequence and actually took place after all the other coaches’ teams were full. Why? Because it made no sense that Blake was the only coach to turn around. In addition, Blake . turned nothing but after Camila – who has already proven to be a cunning strategist – pretty aggressively urged Blake to push his button. Why didn’t Camila want Brayden for herself? Why did she want Blake to have it? The mind bewilders.

Who turned around? Just Blake.

Result: Team Blake. “I’m telling you, you’re going to thank me later,” Camila told her rival. “This man is your secret weapon.” I think the real secret is that Camila plans to steal Brayden from Blake during the combat rounds.

John was “fascinated” by this soulful country crooner, telling him, “I felt all that beautiful American music flowing through you.” At first, John and Peyton didn’t seem like a match, but when Peyton expressed his love for John’s signature song “All of Me” and the two duets on that love ballad, it kind of made sense. Gwen’s attempt to get Peyton to sing “Hollaback Girl” was not so successful.

Who turned?: John, Gwen and Blake… but Blake was blocked by John.

Result: Team legend! Let’s face it, Peyton probably would have ended up with Blake otherwise, so John’s decision to use his one Block on this special vocalist paid off.

And so the episode ended with Blake’s luck running out again. But check back next Monday for more season 22 blind auditions. 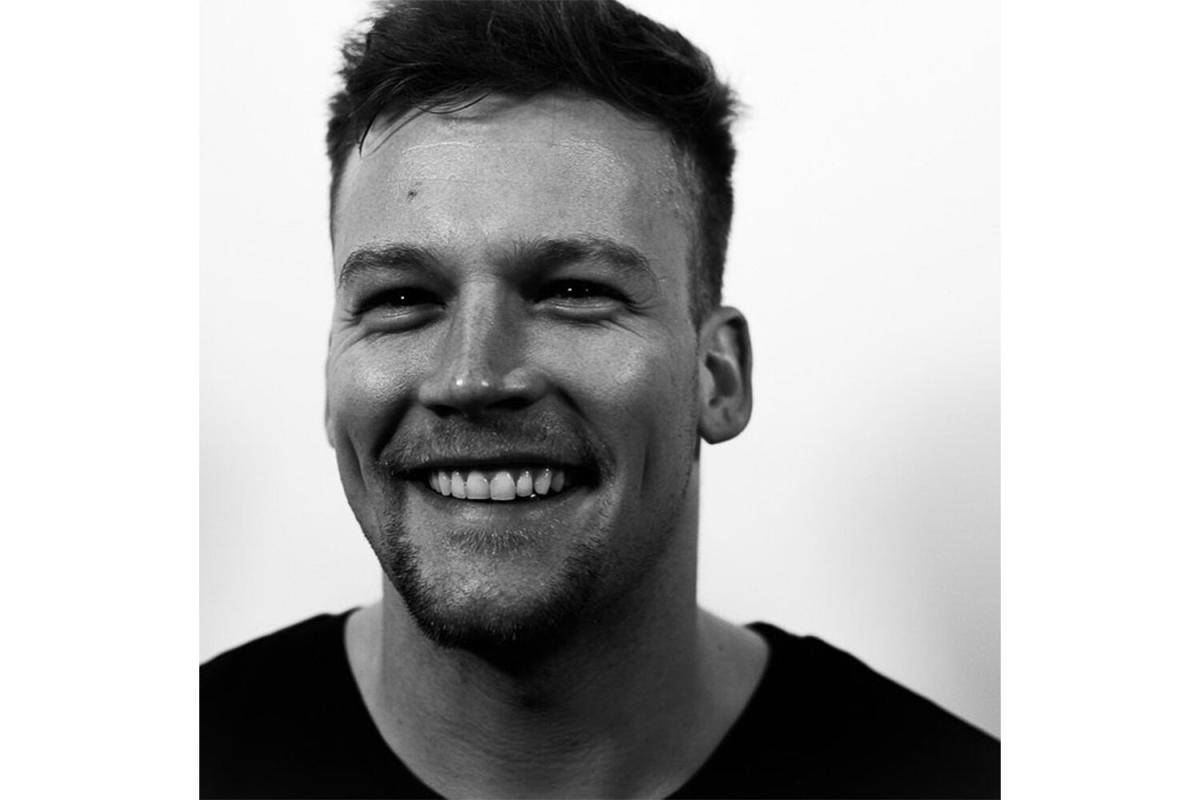 ‘He was always looking for more’ 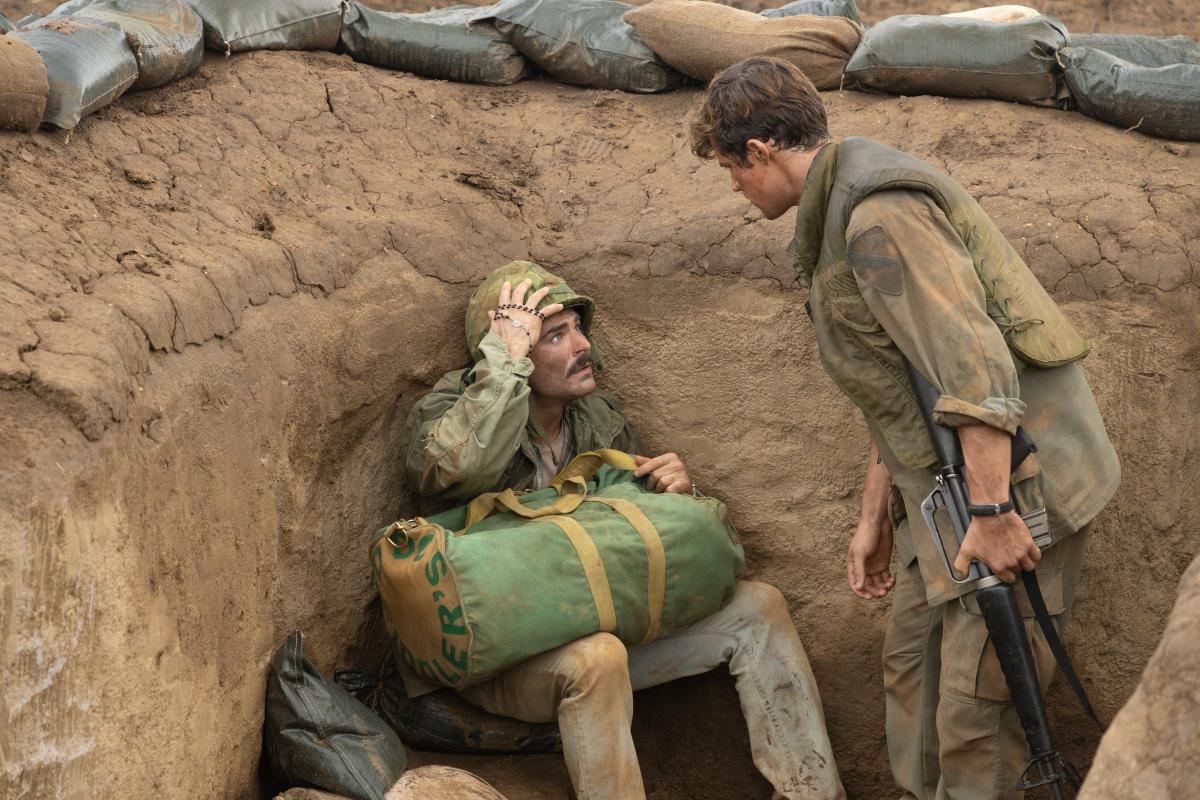 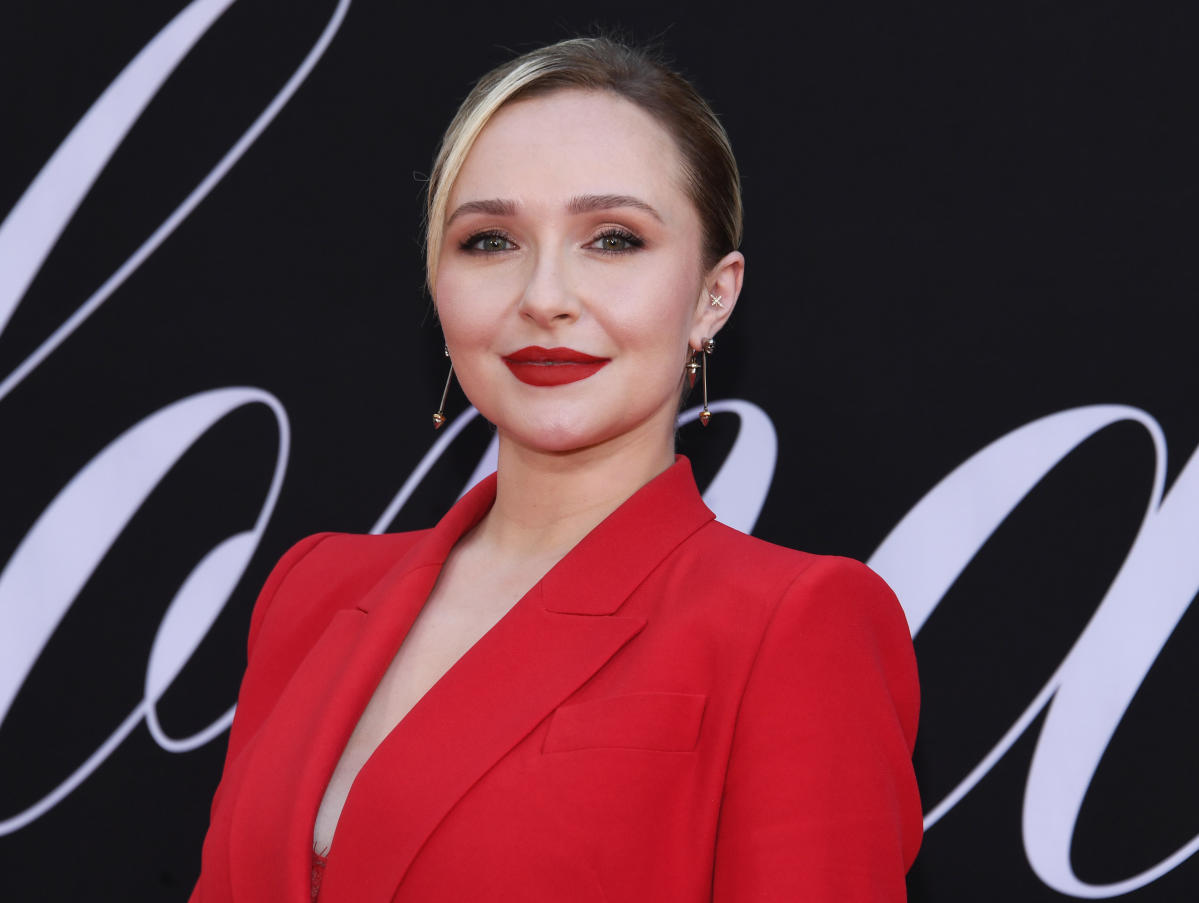